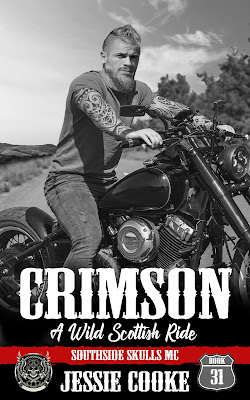 Eric “Crimson” Adair came from Scotland to America with one thing on his mind, to find his little brother Lucas and take him home. Amelia Sanders is looking to escape her overbearing brother. A mysterious woman named Mia will bring the two together and while Crimson turns to the Southside Skulls for help finding his brother, Amelia will struggle to escape from the ranch, and from Mia. The only problem she’s facing: How does a person escape a part of herself?
Dax Marshall is smart, savvy, and sometimes ruthless. His leadership of the Southside Skulls has taken them to places that even his father, the legendary Doc Marshall, never thought they could go. But when he agrees to help Crimson track down Lucas he inadvertently pulls the club into a dangerous web that involves a hit man, a Mexican drug lord, and the FBI. Dax and the Skulls are prepared to fight to defend their club and their territory, as always, but what Dax never bargained for was the kidnapping of his sweet little girl, and the turmoil that follows.
From Mexico to Boston, this action-packed story will explore mental illness, family loyalty, and the tightrope that is often walked between the right and wrong sides of the law. As usual, the Southside Skulls, led by the one and only Dax Marshall, are ready to take you on a wild ride.

Prologue - Acapulco, Mexico Ernesto De La Cruz knew he wasn’t an easy man to look at. He’d been cursed as a teenager with a case of acne that would have rivaled any leper in the Dark Ages for the scars it left behind on his skin. His entire body was covered with them, but the ones on his face he couldn’t hide. They were deep and made his cheeks look like those big craters out in the desert, the ones people paid money to look at, where some shyster claimed a meteor had struck the earth. Ernesto didn’t believe that bullshit. He also didn’t believe that the pretty dark-haired señorita who was currently batting her long eyelashes at him found him in any way attractive. What he knew she saw was the expensive watch, the designer suit and sunglasses, the shiny, two-thousand-dollar shoes...and maybe she’d gotten a glimpse of the fat money clip he’d pulled out of his pocket to pay for his drink. He was no fool, for sure...but that didn’t mean he was crazy enough to not take advantage of every opportunity that came his way, either. He raised his drink to the dark-haired, dark-eyed beauty and then downed the amber liquid and felt the burn as it slid down his throat and into his stomach. He kept his own dark eyes, covered by the mirrored sunglasses, on the señorita, and took the buzzing phone out of his pocket. He knew who it was without glancing at it. The phone was a burner, and he’d been given it for one thing only, so that Tomas could get in touch with him. Tomas was the go-between for Ernesto and the man who was actually paying him for this job. Ernesto knew who he was working for, and he didn’t like having to deal with him through a “yes” man. He thought it disrespectful that a man who wanted another man dead couldn’t talk to him face to face. Not that Tomas Locastro was a nobody. In the impoverished community that clung to a hillside in Mexico, where his boss had built an empire, Tomas was known as “El Dimonio,” or “The Demon.” “Hola,” he said into the phone to Tomas. “Speak English, puto!” Tomas snapped at him, and not for the first time. Ernesto didn’t like to be talked down to, especially by a “yes” man. Ernesto barely spoke Spanish. He only did it to antagonize Tomas, and it worked. Ernesto was born in Philadelphia and he’d even worked hard to rid himself of the strong East Philly accent. People thought it made him sound “stupid,” and that couldn’t have been further from the truth. Tomas was born in a border town in Texas, and it was obvious to Ernesto that he had worked hard to rid himself of his Spanish accent, which was why it annoyed him so badly when Ernesto spoke Spanish to him. What Ernesto knew about Tomas was that he had graduated high school, and he’d been the first in his family to go to college, and on an academic scholarship to boot. The man was said to be brilliant, and at that time he’d had an eye on politics. After obtaining a degree in liberal arts with a major in civics and minor in economics, Tomas had gone home to Texas and he had run for a local city office in his hometown, and won. He went from there to mayor of his home town, and then, just when he could almost smell the expensive interior of the Governor’s mansion, his little brother called him, and what he had to say changed the course of Tomas’ life.
Posted by Digital Dirty Girl Book Blog at 3:00 PM